My name is Boer, James Boer

But you can call me “Kees,” which is pronounced CASE, just like “Tiffany Case.” See, I’m Dutch, and my middle name is Jacobus, which has been translated to James before. For instance, every time that the word Jacobus is used in the English Bible, it was translated to James. 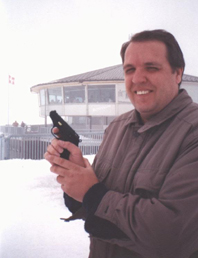 I love the Bond movies! As a matter of fact, I’ve been a Bond fan for quite a while now. It started when I was just a child. One of my relatives gave me a gold Corgi Aston Martin model from the movie Goldfinger. I had a great time playing with it. It even had a miniature ejector seat in it, and when you pressed a button on the side, a little figure was tossed through the roof of the car. For a while I thought that the guy being thrown through the roof was James Bond, because he had the most action!

It wasn’t until later that I started watching the Bond movies. I loved the action, the scenery, the plot, and the villains. Not that I approve of everything Bond does, (such as his womanizing), but overall his movies are awesome.

Let me explain the pictures. The first picture is “yours truly” on top of a mountain in Switzerland, where they filmed the Bond movie On Her Majesty’s Secret Service. The building in the back is where most of the action in the film took place. Right now it is a revolving restaurant from which you can view a beautiful panorama of the Swiss Alps.

The next picture is me waxing the actual car that James Bond drove in Goldfinger. I had a model of this car when I was a child. That was the most fun I’ve ever had waxing a car!

Now some of you might think that my biggest hero in life is James Bond, right? Nope! My biggest hero is the Lord Jesus Christ! Now before you close this pamphlet thinking that I’m some sort of Jesus freak, let me encourage you to read on for just a little longer! Or as Q says: “Now pay attention, 007!” 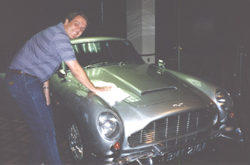 You see, the reason that I love Christ above our friend James, is that Christ did something that no one else has ever done or could do! Christ paid for my sins!

The Bible says that all of us are sinners; we have all broken God’s laws in our actions, words, and thoughts. Even 007, though sarcastic, agrees with this. Watch the movie For Your Eyes Only. He says to Q: “Forgive me father, for I have sinned.” Q’s response is “That’s putting it mildly, 007!” If we started really looking at what God required in His laws, the same thing can be said to us! We have all broken God’s laws in many ways. Our sins and guilt are separating us from God. To go to heaven, however, we must be perfect. Left to ourselves we could never go to heaven on our own merits.

God loves us though! He wants us to be with Him in heaven for all eternity. So, God sent His Son, Jesus Christ to earth to take our sins and guilt upon Himself. Christ went to the cross and paid for our sin there. He took the punishment that we deserve. Afterwards, He rose from the dead, proving that He had paid for our sins.

All He asks us to do in response is to place our trust in what He has done for us on the cross! In other words, not to trust in our own ability to get us to heaven, but in what He did for us. The Bible puts it this way: “For God so loved the world, that He gave His only begotten Son, that whosoever believes (trusts, relies upon) in Him, should not perish, but have everlasting life.”

Isn’t that simple? God loves me, but I have sinned. Jesus paid for my sin; if I trust Him, I can be assured of going to heaven after I die!
When I understood this, I placed my trust in Him. Now I know for sure that I have eternal life. My sins are forgiven! I have a purpose to live for, and that is to tell others what Christ did for me!

It’s a new world, with new enemies, and new threats, but you can still depend on one Person: Jesus Christ!